Danrae Group excels at waterproofing – and we love a challenge. So, some of our best work comes from a complex brief.

Our waterproofing remediation for the Lacey On Cooper apartment building in Sydney’s vibrant Surry Hills district showcased our expertise in diverse waterproofing techniques… and our deft hand at end-to-end project management. 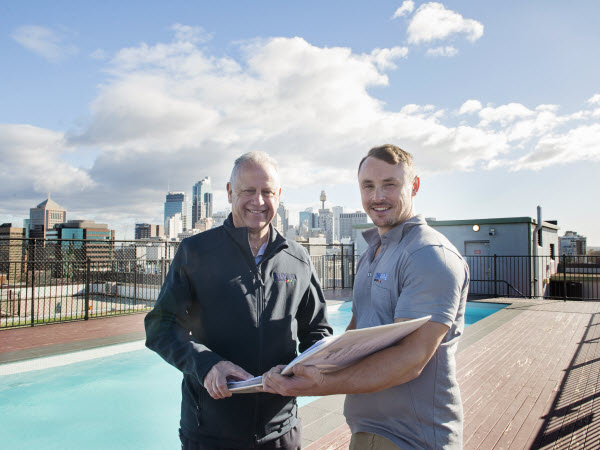 Damien Pratt has owned an apartment in the Lacey On Cooper building since 2006. Built in the 1970s, it was converted to apartments in the 1990s – and it’s been beset by waterproofing issues since. “Over the years, we’ve had several stints at repairing the waterproof membrane,” says Damien. “Then recently, we developed significant leaking into the level six apartments. And that meant that we needed to do some serious work here.”

Damien decided to put it out to tender to find the best waterproofer around.

And that brought him into contact with Ron Caruana – Danrae Group Co-Founder, exceptional waterproofer, electrician, project manager… and problem-solver.

Damien’s brief was to fix the waterproofing issues in the roof which houses a swimming pool, deck and tennis court. He needed it fixed with minimum disruption for the tenants – and fixed permanently.

Danrae Group has decades of experience in high rise waterproofing – and we’ve seen every issue in strata, from leaking planter boxes to pervasive concrete cancer. But the Lacey on Cooper project presented a unique challenge. 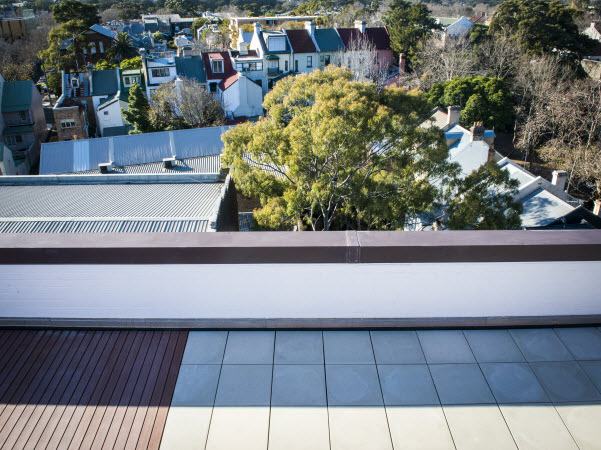 “The complexity of this sort of project is to do with logistics,” advises Ron. “The job itself was relatively straightforward for us, but being 16 stories high, we had to crane up all the materials.” And that was just the beginning. “We also had to coordinate the crane hire and street blockage with deliveries of pavers from Melbourne, the arrival of the carpenters with their decking and the carpet guys bringing in the artificial turf for the tennis court. And we had ten cubic metres of rubbish that had to be removed from the roof.”

And it all had to happen… in one day.

It’s a testament to Ron’s extensive project management experience – and the exceptional skills of Danrae’s diverse team – that the deliveries, set up and clean up went seamlessly. 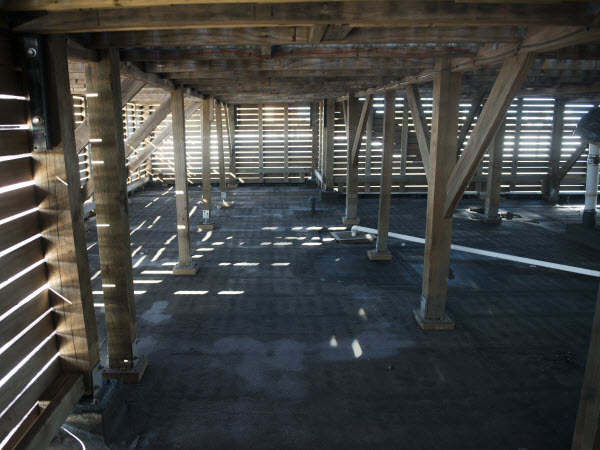 Ron might describe the project as straightforward – but that’s only for an industry leader.

Damien’s previous attempts to find a solution had been anything but easy. “The previous repair work and the garden then put on top were not compatible. It was an issue that came from having multiple contractors working on different areas at different times. And that caused further problems with the waterproofing membrane.”

The Danrae team discovered the mess on their first visit. “The work that was carried out previously was very poor,” says Ron.

“The whole roof looked like a bomb had hit it… with fencing and cables everywhere.” Zach Smith, a specialist waterproofer with Danrae, was also there from the beginning. “There were broken pieces of old decking, broken pavers… and the membrane had splits everywhere.”

The first stage would be clean up, followed by removal of the old membrane which had deteriorated and lifted. The team would install two separate membranes – one for the swimming pool area and one for the tennis court. Then there would be safety and compliance testing, laying of new decking and pavers and a full site clean-up.

Danrae Group is distinct from many other waterproofing contractors with its in-house expertise. And Zach is one of our dedicated team members with specialised knowledge. “He’s a professional torch-on waterproofer. And it’s a skill that’s hard to find these days. They are very few and far between,” advises Ron. “Zach did the job, and he did it very well.” 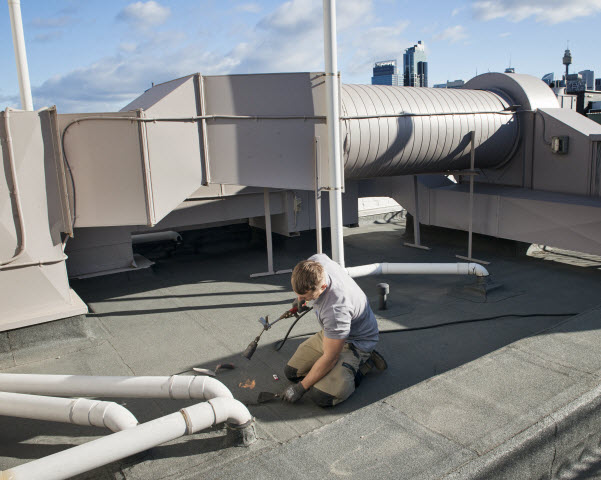 For Zach, there was a lot to work around – beneath and above the roof. He explains: “There’s a lot of detail on this roof, especially underneath the pool. All the decking posts were on top of the old membrane. I needed to jack them up to put the new membrane underneath and then re-level the surface. That was a challenge.” And the challenges continued at other stages. “There were very heavy pavers as well. I had to go step by step, so I couldn’t do a full ten metres at once. I had to go slowly… working on just a couple of metres at a time.”

While most of the roof was completed using the torch-on technique (the specialist membrane is ‘torched-on’ or welded to the surface), the tennis court needed a PVC membrane, “so we used a PVC specialist,” says Ron. It’s a perfect example of Danrae’s diverse skill-set and commitment to quality. 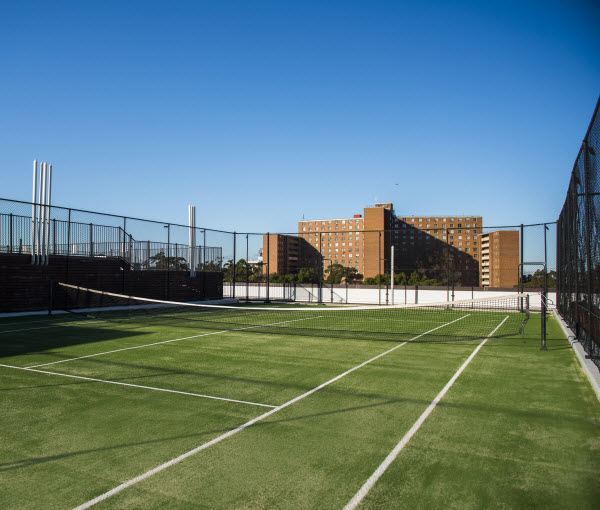 For Damien, the project was a complete success – in terms of exceptional commercial waterproofing… and very happy tenants.

“We started the project before summer. We have a swimming pool and tennis court which residents like to use. Previous works had actually closed the roof over summer and that caused a fair bit of distress in the building,” he says. “One of our key deliverables was for Danrae to keep the roof open in summer. And they did that with no problem at all by working on one side at a time. We had zero complaints from the residents about the work – and that has never happened before!”

For Damien, there were other winning points. “The supervisor on site has been really helpful. The project manager has been amazing. It’s been very good communication. We were never left in the dark about anything at all.”

At Danrae Group we take pride in being the waterproofing experts. We excel at end-to-end waterproofing management – including diagnostics, design and remediation. And we work across the commercial, construction, civil, strata and residential sectors.

Contact us if you need fast response, first-class waterproofing – or if you have an ongoing issue in need of a permanent solution.